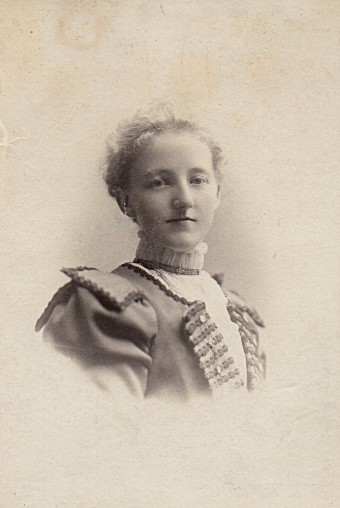 Mary Davies, 1900, before her marriage to August Wingebach

When the New York City Press Club gave a reception welcoming Charles Dickens to the U.S. in 1868, journalist Jane Cunningham Croly applied for a ticket. The all-male club treated her request as a joke.

The invitation they eventually extended to a small group of women, “to prevent each other from feeling lonely,” was so condescending, Croly rescinded her application. She then started a club for professional women, called Sorosis.

Also in 1868, a group of Boston women (including poet and activist Julia Ward Howe, who wrote the lyrics to “Battle Hymn of the Republic”) independently founded the New England Women’s Club, which focused on social issues. Soon clubs began to form in towns and cities around the country, giving women—mostly white and mostly middle-class–a chance to get out of the house, socialize, and learn, changing society in the process.

For my great-grandmother, Mary Davies Wingebach, joining the Athenaeum Club in New York City must have saved her sanity. She had been working as a secretary in the field of publishing since the age of 14, when she taught herself typing and shorthand. Marriage and the abrupt transition to housework, after more than a decade as a working girl, must have been a shock. What a relief to get out of the house every Tuesday afternoon, from October through June, and share the life of the mind with other women!

The Athenaeum Club, formed in 1898 for “the intellectual and social improvement of its members,” was typical of literary clubs, in which women researched writers, artists, and historical figures and wrote papers to be read aloud at club meetings. These women were not radicals, marching for the vote. They reflected the attitudes of Jane Croly, who believed women were morally superior to men due to their focus on home and family, and they therefore had an important role to play in influencing the world outside the home. According to Karen J. Blair, author of the 1980 monograph, The Clubwoman as Feminist. “Croly’s refusal to relinquish the domestic sphere and her attempt to reconcile it with public influence yielded the Domestic Feminism that club members practiced.”

Most clubwomen’s attitudes were conservative, in comparison with the suffragettes, whose picketing, hunger striking, and political lobbying led to Congress granting women the right to vote. But Blair contends that women’s clubs had more influence than the radicals gave them credit for.

By teaching skills of researching, critical thinking, and public speaking, the clubs paved the way for women to enter business and politics. Clubs that addressed social issues lobbied government to take on responsibilities we now take for granted, such as passage of pure food and drug laws and the regulation of child labor.

The clubs also gave women an identity outside the home and permission to move beyond the limited wife and mother roles expected of them. I’m proud and grateful that my great-grandmother helped lay the groundwork for changes that my life has built upon.

Violet Snow is writing a historical novel, To March or to Marry, about suffrage and the women’s club movement.